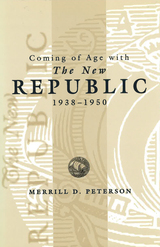 In this absorbing memoir, Merrill D. Peterson traces his progress from a young Kansas Republican to a "Left Liberal," Democrat by reconstructing how the New Republic singularly influenced his intellectual development and academic career during some of the most turbulent years in American history—the final years of the Great Depression through World War II and the beginnings of the Cold War. Peterson recalls how, as a young man, he was guided to intellectual maturity by such extraordinary individuals as Max Lerner, Archibald MacLeish, Vincent Sheean, Alfred Kazin, Lewis Mumford, and Malcolm Cowley—all contributors to this important magazine. We look back, with Peterson, and see how their views are inextricably reflected in his own developing worldview.

Peterson was introduced to this liberal weekly by one of his teachers during his senior year of high school (1938-1939). For the next ten years, the magazine served as his principal guide to the politics and culture of the times. Now, at seventy-eight years of age, Peterson revisits the magazine that he read so eagerly during those early, impressionable years. With considerable skill and charm, Peterson weaves together the fresh reading, the history of the country during the 1940s, and his own personal history to give us the heart of the book. In addition, he includes brief essays on Vernon L. Parrington, Lewis Mumford, and Max Lerner, the three American writers and intellectuals he believes had the most influence on him.

Peterson discusses several turning points in his young life, but he focuses primarily on his education and the role the magazine played in it. The book concludes when Peterson, with a Ph.D. in the history of American civilization, accepts his first academic appointment, at Brandeis University, and approaches the publication of his first book. Thus, a critical chapter in his life comes to a close.

Merrill D. Peterson is Professor of History Emeritus at the University of Virginia-Charlottesville. He is the author or editor of numerous books, including The Jefferson Image in the American Mind, Thomas Jefferson and the New Nation: A Biography, and Lincoln in American Memory.