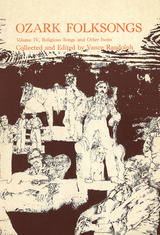 Originally published in 1949, this comprehensive gathering of folksongs is being reissued after many years out of print. The renewed interest in folklore among the general public as well as the scholarly community has prompted this publication.

The collection comprises four volumes including more than eight hundred songs, indexed by title, by first line, and by contributor and town. Each song is thoroughly annotated. In addition to lyrics, the compiler furnished scores and variant lyrics and titles for each song and listed similarities to other songs along with whatever historical information was available to him.

The songs are presented in four volumes. The fourth volume is an assortment of religious songs, hymns, and revival tunes along with sentimental ballads and journalistic pieces.

Characteristic of the compiler's careful work is the painstaking accuracy with which dialect peculiarities are preserved. Randolph scrupulously avoided correcting pronunciation or adding missing words or forgotten lines. Because, as he explains in his introduction, many of the people who sang for him were reluctant to have their voices recorded, his texts represent the best possible reproduction of this priceless American folk art.

A new introduction by W. K. McNeil, folklorist for the Ozark Folklore Center and book review editor for the Journal of American Folklore, comments on Randolph's importance to the field of American folklore and the significance of this work in particular.

Vance Randolph is a well-known American folklorist. Among the many works on folklore, superstition, and customs that he has written over his long life are Ozark Mountain Folks (1932), The Ozarks and American Survival of Primitive Society (1931), Who Blowed up the Church House? & Other Ozark Folk Tales (1952), Hot Springs and Hell, and Other Folk Jests and Anecdotes from the Ozarks (1965).