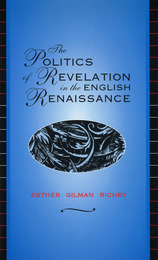 Recognizing that the seventeenth century's volatile debate over apocalyptic interpretation has since become a one-sided discussion, Esther Gilman Richey develops a context that recovers the dynamism so inherent in the writings of the period and provides illuminating details that enhance the prophetic continuum. The Politics of Revelation in the English Renaissance does not ignore the familiar prophetic verse of Spenser and Milton, but it significantly expands the scope of study by examining the interpretations of both men and women who represent a range of ecclesiastical and political perspectives.

Richey rejects Barbara Lewalski's claim that the radical, prophetic writers and metaphysical poets of the seventeenth century drew inspiration from distinct biblical models, the former from the Apocalypse and the latter from the Psalms. Instead she contends that even writers such as Donne and Herbert, whom we have long considered "literary," were in reality using their poetry to participate in the hottest debates of the time.

While the radical writers, such as Spenser and Milton, were immediately responsive to ecclesiastical and political controversies, the conservative, metaphysical poets—Donne, Herbert, and Vaughan—were posing equally politically charged questions: Is the pope Antichrist? Is the Bride of Christ pure? Is the Temple a model of ecclesiastical reform? The writers of the period did not move in divided and distinguished worlds, but in fact constantly responded to one another through poetic and politically charged dialogue.

By drawing from the writings of various individuals, both radical and conformist, male and female, Richey traces the shifting representations of the apocalyptic Bride and Temple over time. Organized chronologically, the chapters of The Politics of Revelation in the English Renaissance reveal the escalating debate among the pacifists, conformists, militants, and feminists. Not only does Richey uncover the prophetic dimension of conformist writers usually described as apolitical and devotional, but she also explores the writings of lesser-known women prophets: Aemilia Lanyer, Mary Cary, Anna Trapnel, and Margaret Fell. In such biblical passages as the apocalyptic "woman clothed with the sun," these early feminists find the authority for their own prophetic speech.

This provocative analysis—at once far-reaching and tightly focused—reveals the complexity of the apocalyptic discourse that transpired among Renaissance writers and poets.

Esther Gilman Richey is Assistant Professor of English at the University of North Carolina at Charlotte.