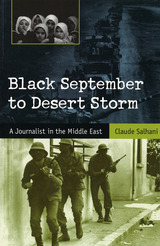 For more than twenty years, Claude Salhani traveled throughout the volatile Middle East as a photojournalist and reporter in search of the region's biggest stories. Wars, terrorist acts, demonstrations by religious extremists, and the flight of refugees were among the events he witnessed. "I have seen much through my lens . . . the most terrible cruelties, the most horrible suffering—and the most improbable and moving acts of love and generosity. I have been warmly received by kings, prime ministers, and secretaries of state. I have been shot at, kidnapped, and rifle-butted," writes Salhani in the prologue of this fascinating account.

From exclusive travels with former U.S. Secretary of State Henry Kissinger to intimate moments with combatants in the battle for Beirut to the forbidden world of drug smugglers in Lebanon, to the Iranian Revolution, and finally to the rise of Desert Storm, Salhani transports readers behind the scenes of many groundbreaking news stories. He proves that behind the front-page story we see, an equally intriguing tale is often hidden—that of the difficult, bizarre, even comical circumstances in which news is obtained.

Offering insight into the potent mixture of journalism and warfare, Black September to Desert Storm shares with readers an extraordinary journey into the headline-grabbing sagas that have plagued the Middle East in the last three decades. Salhani's "behind-the-lens" perspective will appeal to students of journalism and the Middle East, as well as anyone simply fascinated by the trials that many journalists undergo to capture "The Story."

Claude Salhani, a photojournalist, reporter, and news executive for the last twenty-eight years, is currently Director of the UPI NewsPicture Service in Washington, D.C. His photographs and articles have been published in numerous newspapers and magazines in Europe and the United States, including Time, Newsweek, Paris Match, and many others.