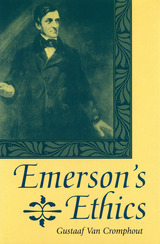 Everyone knows that Emerson was a moralist, but what does that really mean? In an attempt to answer that question, Gustaaf Van Cromphout provides in Emerson's Ethics a detailed and philosophically grounded discussion of Emerson's moral thought. In this first comprehensive study of Emerson's ethics in the broader context of ethical theory, Van Cromphout explores Emerson's answers to what he considered the basic question facing any thinking human being: "How should I live?"

Van Cromphout begins by examining Emerson's college essays on ethics—essays that reflect his response to the moral thought prevailing in his intellectual environment. He then discusses the mature Emerson's attempt to establish ethics on a surer foundation than the religion inherited from his forebears, showing that Emerson was influenced significantly by Kant's moral thought.

He goes on to examine Emerson's search for a morally competent self in an age when the very notion of "self" was under serious threat. The ethical dimension of Emerson's politics and his theories of friendship and love, as well as the quest for a life worth living in the modern world, are also addressed. The last chapters are devoted to nature and literature. Van Cromphout explores Emerson's understanding of nature as a focus of ethical responsibility, and he examines the corruptibility of language, the ethics of self- expression, and the moral responsibilities of writers toward their audiences. Emerson believed that ethics permeated every aspect of human life. By examining Emerson's understanding of ethics and his contribution to ethical thought, Emerson's Ethics shows one of the truly great minds in American culture confronting issues of fundamental relevance to all human beings. Filling an important gap in Emerson studies, this book will appeal not only to readers interested in Emerson and his significance in American thought and literature but also to readers concerned with ethics and, more generally, with the interrelations of literature and philosophy.

Gustaaf Van Cromphout is Professor of English at Northern Illinois University. He is the author of Emerson's Modernity and the Example of Goethe.