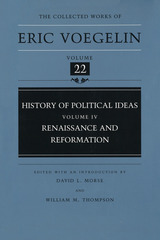 By closely examining the sources, movements, and persons of the Renaissance and the Reformation, Voegelin reveals the roots of today's political ideologies in this fourth volume of his History of Political Ideas. This insightful study lays the groundwork for Voegelin's critique of the modern period and is essential to an understanding of his later analysis.

Voegelin identifies not one but two distinct beginnings of the movement toward modern political consciousness: the Renaissance and the Reformation. Historically, however, the powerful effects of the second have overshadowed the first. In this book, Voegelin carefully examines both periods and their presence in modern thought.

The Renaissance, represented by the works of Niccolò Machiavelli, Desiderius Erasmus, and Thomas More, is characterized by a struggle for balance. Machiavelli and Erasmus both looked to a virtuous prince to achieve order, one calling for brute force and the other for Christian spirituality to reach their goal. Also a participant in the first beginning of modernity, More was a complex thinker identified as a saint both of the church and of the communist movement. The issues he explored in Utopia, as Voegelin demonstrates, indirectly gave rise to concepts that have profoundly affected Western history: colonization, imperialism, national socialism, and communism.

Exploring the transition from the Renaissance to the Reformation is a brilliant chapter, "The People of God," which examines the sectarian movement. These pages contain the rich historical background that led to Voegelin's later conclusions about Gnosticism and its modern influences.

Voegelin offers a controversial view of the Reformation as well as the political and religious situation directly preceding it. Yet he sheds light on the strengths and inadequacies of its key figures, Martin Luther and John Calvin. The driving force behind the Reformation stemmed solely from the powerful personality of Luther. What began as an abstract, purely technical discussion developed into a full-blown revolt. Later in the period, Calvin confronted the problems left behind by Luther and endeavored to create his own universal church to supplant the Catholic Church. His theory of a new elite would have a distinct impact on history.

By examining the political ideas that first emerged during the Renaissance and Reformation, this fascinating volume provides a foundation for understanding the events of centuries to follow.

David L. Morse is Senior Pastor of Monroeville United Methodist Church in Pennsylvania. He is also Adjunct Professor in the Theology Department at Duquesne University in Pittsburgh. He has written his doctoral dissertation on Eric Voegelin.

William M. Thompson is Professor of Systematic Theology at Duquesne University. He is the author or editor of numerous books, including Voegelin and the Theologian: Ten Essays in Interpretation.