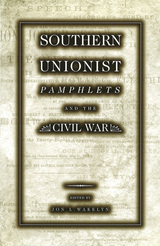 During the Civil War, many southerners expressed serious opposition to secession and openly entreated their fellow southerners to maintain support for the Union. A number of these unionists actively opposed the Confederacy while remaining within its borders; others fled their homes and the South, becoming exiles in northern cities and the border slave states. The southern unionist leaders used their oral and written communication skills to proclaim their opposition to the Confederacy, often producing pamphlets that circulated in the North, in the border states, and in the heart of the Confederacy itself. Jon L. Wakelyn unites the voices of these southern unionists in the first comprehensive collection of their written arguments—Southern Unionist Pamphlets and the Civil War.

Including eighteen pamphlets and a discussion of twenty-two others, this book provides a magnificent representation of the southern unionists and their concerns. Written between 1861 and 1865, the pamphlets were compiled by local and national political leaders, including three federal congressmen and future vice president and president Andrew Johnson, as well as concerned private citizens and members of the military and clergy. Except for Florida, South Carolina, and Georgia, all Confederate and border slave states are represented in this collection.

The topics discussed and the events described in the pamphlets cover a wide range of subjects. The authors discuss their motivation to remain loyal to the union, the actions of their friends and enemies, the perilous life of unionists behind military lines, their continued support for the federal government, and their hopes for a restored Union. Aware that their northern allies would read these pamphlets, the unionists also wrote to solicit northern aid, to renew efforts to defeat the Confederacy, and to gain sympathy for the plight of their people behind enemy lines.

A remarkable collection of primary source material, Southern Unionist Pamphlets and the Civil War provides the most detailed study of the internal resistance to the Confederacy available to date. Students, scholars, and general readers alike will find this volume an invaluable resource for Civil War studies.

Jon L. Wakelyn, Professor of History at Kent State University in Kent, Ohio, is the author or editor of eight books, including Leaders of the American Civil War and Southern Pamphlets on Secession, 1860-1861.