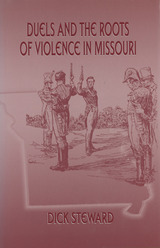 In early-nineteenth-century Missouri, the duel was a rite of passage for many young gentlemen seeking prestige and power. In time, however, other social groups, influenced by the ruling class, engaged in a variety of violent acts and symbolic challenges under the rubric of the code duello. In Duels and the Roots of Violence in Missouri, Dick Steward takes an in-depth look at the evolution of dueling, tracing the origins, course, consequences, and ultimate demise of one of the most deadly art forms in Missouri history. By focusing on the history of dueling in Missouri, Steward details an important part of our culture and the long-reaching impact this form of violence has had on our society.

Drawing upon accounts of at least a hundred duels—from little-known encounters to those involving celebrated figures such as Senator Thomas Hart Benton, Charles Lucas, Thomas Biddle, Spencer Pettis, and John Smith T—Steward shows how the roots of violence have penetrated our modern culture. He traces the social and cultural changes in the nature of the duel from its earliest form as a defense of honor to its use as a means of revenge. By the latter part of the nineteenth century, the formal southern duel had for the most part given way to the improvised western duel, better known as the gunfight. Involving such gunslingers as Wild Bill Hickok and Jesse James, these violent acts captivated people not only in the state but also across the nation. Although the violence entailed different methods of killing, its allure remained as strong as ever.

Steward re-creates the human drama and tragedy in many of these hostile encounters, revealing how different groups operating under the code duello justified family and clan feuds, vigilante justice, and revenge killings. This often-glamorized violence, Steward argues, was viewed as a symbol of honor and courage throughout the century and greatly influenced behavior and attitudes toward violence well into the twentieth century.

While this work centers mainly on Missouri and the history of dueling in the state, its inferences extend well past the region itself. Well-written and thoroughly researched, Duels and the Roots of Violence in Missouri provides valuable insight into the violent social climate of yesterday.

Dick Steward is Professor of History at Lincoln University in Jefferson City, Missouri. He is the author of several books, including Frontier Swashbuckler: The Life and Legend of John Smith T.