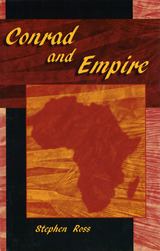 In Conrad and Empire, Stephen Ross challenges the orthodoxy of the last thirty years of Conrad criticism by arguing that to focus on issues of race and imperialism in Conrad’s work is to miss the larger and more important engagement with developing globalization undertaken there. Drawing on the conceptual model provided by Arjun Appadurai and by Michael Hardt and Antonio Negri, Ross maintains that Conrad’s major novels confront an emergent new world order that replaces nation-state-based models of geopolitics with the global rule of capitalism, and shows how Conrad supplements this conceptualization by tracing the concrete effects of such a change on the psyches of individual subjects. Borrowing from Slavoj Žižek and Jacques Lacan, Ross contends that Conrad’s major novels present us with an astute vision of a truly global world order.
Devoting a chapter to each novel, the author analyzes Heart of Darkness,Lord Jim, Nostromo, and The Secret Agent to expose their social vision, their concern with individual experience, and their philosophical synthesis of the two. After showing how Conrad sets the stage, Ross considers selected characters’ personal histories and the family romances by which Conrad sheds light on individual characters’ motives, exposing the penetration of ideological forces into personal lives. He then shows how the drama of slave morality in each of the novels synthesizes their critique of social organization and their attention to personal history by revealing how each novel follows an individual character’s doomed attempt to transcend the totalizing dimensions of Empire.
Ross claims that though postcolonial criticisms of Conrad’s work have produced excellent insights, they remain inadequate to understanding its complexity. Instead, he argues, Conrad’s novels should be read for their compellingly prescient vision of a postnational world under the sway of global capitalism. Although Conrad’s vision of that world is undeniably bleak, Ross believes, his almost willful reaffirmation of the very values he has shown to be bankrupt constitutes a “weak idealism.” Consequently, Ross argues, Conrad’s fiction is profoundly ethical and pertinent to the pressing project of how to live in a bewilderingly variable world.
AUTHOR BIOGRAPHY
Stephen Ross is Assistant Professor of English at the University of Victoria, British Columbia.
TABLE OF CONTENTS