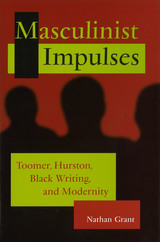 In Masculinist Impulses, Nathan Grant begins his analysis of African American texts by focusing on the fragmentation of values of black masculinity—free labor, self-reliance, and responsibility to family and community—as a result of slavery, postbellum disfranchisement, and the ensuing necessity to migrate from the agrarian South to the industrialized North. Through examinations of novels that deal with black male selfhood, Grant demonstrates the ways in which efforts to alleviate the most destructive aspects of racism ultimately reproduced them in the context of the industrialized city.
Grant’s book provides close readings of Jean Toomer (Cane and Natalie Mann) and Zora Neale Hurston (Moses, Man of the Mountain, Seraph of the Suwanee, and Their Eyes Were Watching God), for whom the American South was a crucial locus of the African American experience. Toomer and Hurston were virtually alone among the Harlem Renaissance writers of prose who returned to the South for their literary materials. That return, however, allowed their rediscovery of key black masculine values and charted the northern route of those values in the twentieth century to their compromise and destruction.
Grant then moves on to three more recent writers—John Edgar Wideman, Gloria Naylor, and Toni Morrison—who expanded upon and transformed the themes of Toomer and Hurston. Like Toomer and Hurston, these later authors recognized the need for the political union of black men and women in the effort to realize the goals of equity and justice.
Masculinist Impulses discusses nineteenth- and twentieth-century black masculinity as both a feature and a casualty of modernism. Scholars and students of African American literature will find Grant’s nuanced and creative readings of these key literary texts invaluable.
AUTHOR BIOGRAPHY
Nathan Grant is Assistant Professor of English at State University of New York at Buffalo.
TABLE OF CONTENTS