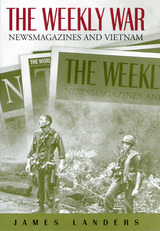 In The Weekly War, James Landers provides the first in-depth investigation of how the three major newsmagazines—Newsweek, Time, and U.S. News & World Report—covered the Vietnam War and the impact their coverage had on the American public, presidents, and policymakers. From March 1965 through January 1973 these magazines reached nearly one-third of adult Americans—second only to news programs on network television. Despite the popular impression that this was primarily a “television war,” the newsmagazines played a prominent role in informing the public about warfare and war policy.
While television reporting provided a here-and-now version of events, these magazines published articles that combined on-the-scene coverage with analysis and commentary. Because these publications worked on a more leisurely weekly deadline as opposed to the daily deadlines of television or newspapers, they were able to provide distinct perspectives on the week’s events, along with factual material. The writing was typically more vivid and detailed than that of newspapers, and the occasional use of color photographs contributed to the impact of the stories.
Each magazine had its own niche and distinct editorial style: Newsweek provided a mainstream liberal perspective, while Time took a more conservative viewpoint and U.S. News & World Report had an ultraconservative outlook. The editors of each magazine aimed to reach like-minded readers, knowing full well that a reader who disliked one magazine could simply switch to another. Landers demonstrates how public-opinion shifts during the war forced the newsmagazines, especially Time, to change too.
This book reflects a thorough examination of roughly nine hundred articles on the Vietnam War published by the three major newsmagazines. Landers also gathered documents from the Lyndon Baines Johnson Library and Richard M. Nixon Presidential Materials Project to reveal the attention paid to the newsmagazines by presidents and policymakers and their attempts to influence or manipulate coverage.
In addition to making a major contribution to the history of print journalism, The Weekly War complements scholarship on television news coverage of the Vietnam War. This volume will appeal to students and teachers of history and journalism, as well as the general reader interested in a unique view of the Vietnam War.
AUTHOR BIOGRAPHY
James Landers is Assistant Professor in the Department of Journalism and Technical Communication at Colorado State University in Fort Collins. He served tours of duty in Vietnam and Thailand with the Air Force from 1968 to 1970. Landers has been an editor or reporter with the Des Moines Register and Milwaukee Journal, as well as other daily papers.