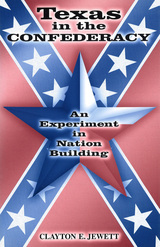 Historians examining the Confederacy have often assumed the existence of a monolithic South unified behind the politics and culture of slavery. In addition, they have argued for the emergence of a strong central state government in the Confederacy. In Texas in the Confederacy, Clayton E. Jewett challenges these assumptions by examining Texas politics, with an emphasis on the virtually neglected topic of the Texas legislature. In doing so, Jewett shows that an examination of state legislative activity during this period is essential to understanding Texas’s relationship with the Indian tribes, the states in the Trans-Mississippi Department, and the Confederate government.
Jewett explores the role of leadership and how statesmen understood and handled the apparent contradictions between the national interests of war and the need to protect property and individual liberty. He reveals that the dissemination of political power lay in the state legislature, where politicians united in an effort to protect commercial interests beyond the institution of slavery. This course of action resulted not only from Texas’s development of an identity separate from that of other southern states, but also from Confederate neglect of Texas. This in turn served to undermine the formation of central state authority and directly contributed to the defeat of a southern nation and the war effort.
By advancing the historiographical line of inquiry surrounding the critical issues of secession, military enlistment, cotton trading, economic production, and legislative support for state institutions, Texas in the Confederacy addresses the perennial question of why the South lost the Civil War. It also provides an essential step in changing the direction of inquiry toward a deeper understanding of nationhood and how the South functioned during the Civil War.
AUTHOR BIOGRAPHY
Clayton E. Jewett is Adjunct Professor of History at Austin Community College in Texas.