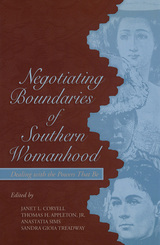 In a time when most Americans never questioned the premise that women should be subordinate to men, and in a place where only white men enjoyed fully the rights and privileges of citizenship, many women learned how to negotiate societal boundaries and to claim a share of power for themselves in a male-dominated world.

Covering the early nineteenth through the early twentieth centuries, Negotiating Boundaries of Southern Womanhood describes the ways southern women found to advance their development and independence and establish their own identities in the context of a society that restricted their opportunities and personal freedom.

They confronted, cooperated with, and sometimes were co-opted by existing powers: the white and African American elite whose status was determined by wealth, family name, gender, race, skin color, or combinations thereof. Some women took action against established powers and, in so doing, strengthened their own communities; some bowed to the powers and went along to get along; some became the powers, using status to ensure their prosperity as well as their survival. All chose their actions based on the time and place in which they lived.

In these thought-provoking essays, the authors illustrate the complex intersections of race, class, and gender as they examine the ways in which southern women dealt with "the powers that be" and, in some instances, became those powers. Elitism, status, and class were always filtered through a prism of race and gender in the South, and women of both races played an important role in maintaining as well as challenging the hierarchies that existed.

Janet L. Coryell is Professor of History at Western Michigan University in Kalamazoo. She is the coeditor of Beyond Image and Convention: Explorations in Southern Women's History (Univeristy of Missouri Press).

Thomas H. Appleton, Jr., is Professor of History at Eastern Kentucky University in Richmond. He is coeditor of A Mythic Land Apart: Reassessing Southerners and Their History.

Anastatia Sims is Professor of History at Georgia Southern University in Statesboro. She is the author of The Power of Feminity in the New South: Women's Organizations and Politics in North Carolina, 1880-1930.

Sandra Gioia Treadway is Deputy Director of the Library of Virginia in Richmond. She is the coeditor of Beyond Image and Convention: Explorations in Southern Women's History (University of Missouri Press).