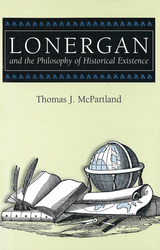 Bernard Lonergan's ambitious study of human knowledge, based on his theory of consciousness, is among the major achievements of twentieth-century philosophy. He challenges the principles of contemporary intellectual culture by finding norms and standards not in external perceptions or reified concepts, but in the dynamism of consciousness itself.

Lonergan and the Philosophy of Historical Existence explores the implications of Lonergan's approach to the philosophy of history in a number of distinct but related contexts, covering a variety of intellectual disciplines. Each chapter can be read independently, but the series of chapters provides a coherent unfolding of Lonergan's case that the norms of inquiry endure as a standard of human thought and action amid continuous changes and fluctuations in politics, morals, religion, science, and scholarship. The book explains how Lonergan's idea of development follows from his theory of consciousness and how his treatment of human development inevitably focuses on historical development. The central theme of the book is that Lonergan's philosophy of history makes a pronounced distinction between historicity and historicism.

McPartland relates Lonergan's work to existentialist themes and, in the last chapters, to the work of Eric Voegelin. The book addresses the existentialist themes of dread, suffering, guilt, shame, and ressentiment—within overall themes of history, philosophy, and religion. McPartland argues that Lonergan's unique perspective on scientific method, epistemology, metaphysics, and critical theory can illuminate what seem to be the quite alien topics of reason as religious experience, the anxiety of existence, the existential roots of bias, and mythopoesis and mystery. Here there is a remarkable parallel to the philosophy of history of Eric Voegelin. The concluding chapters of the book show how the equivalence of the two philosophies offers a mutually enriching dialogue between Lonergan's critical realism and Voegelin's existential exegesis.