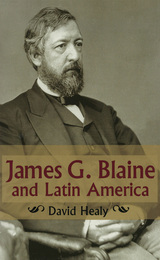 James G. Blaine was one of the leading national political figures of his day, and probably the most controversial. Intensely partisan, the dominant leader of the Republican Party, and a major shaper of national politics for more than a decade, Blaine is remembered chiefly for his role as architect of the post-Civil War GOP and his two periods as secretary of state. He also was the Republican presidential candidate in the notorious mud-slinging campaign of 1884. His foreign policy was marked by its activism, its focus on Latin America, and its attempt to increase U.S. influence there.

James G. Blaine and Latin America asserts that Latin America lay at the heart of Blaine's foreign policy and his vision for America. David Healy examines seven major issues that collectively defined the secretary of state's methods, goals, and views regarding Latin America and, more broadly, the international role of the United States. Healy places his explorations within the larger context of Blaine's ongoing role as a national party leader, his relations with the presidents under whom he served, and the responses of his predecessors and successors toward the issues at hand in Latin America.

The result is a deeper understanding of Blaine's ambitious vision for his country's international role, his energy and aggressiveness in moving to achieve that vision, and his effective efforts to transmit his worldview to the public. Blaine's emphasis on the importance of Latin America to the United States and his conviction that his country should be a world power influenced a new generation of leaders who, at the end of the century, would go beyond his goals and usher in a new era.

David Healy is Professor Emeritus of History at the University of Wisconsin-Milwaukee. He is the author of four previous books, including Drive to Hegemony: The United States in the Caribbean, 1898-1917.