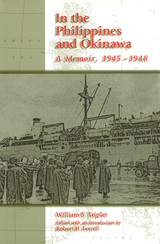 In the Philippines and Okinawa, the third volume of Colonel William S. Triplet's memoirs, tells of Triplet's experiences during the American occupations in the early years after World War II. Continuing the story from the preceding books of his memoirs, A Youth in the Meuse-Argonne and A Colonel in the Armored Divisions, Triplet takes us to the Philippines, where his duties included rounding up isolated groups of Japanese holdouts, men who refused to believe or admit that their nation had lost the war, and holding them until the time came to transport them back to Japan.

Triplet also had to reorganize his battalions and companies to raise morale, which had plummeted with the end of the war and the seemingly dull tasks of occupation. When he took over his assignment of commanding a regiment in a division, he was dismayed to discover the unmilitary habits of almost everyone, regardless of rank. A strict disciplinarian himself, Colonel Triplet, who had served in both world wars, at one time commanding a four-thousand-man combat group, brought his regiment of garrison troops back into shape in a short time.

Okinawa presented the new challenge of bringing order to an island that had seen the deaths of one hundred thousand civilians. Virtually every building on the island had been leveled, and tens of thousands of Japanese defenders had been killed. Triplet was also obliged to oversee the temporary burial of thirteen thousand U.S. servicemen, both soldiers and sailors.

In the Philippines and Okinawa portrays the ever-changing, very human, and frequently dangerous occupation of two East Asian regions that are still important to American foreign policy. Any reader interested in military history or American history will find this memoir engaging.