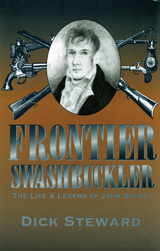 Few frontiersmen in the late eighteenth century and early nineteenth century epitomized the reckless energies of the West and the lust for adventure as did John Smith T—pioneer, gunfighter, entrepreneur, militia colonel, miner, judge, and folk hero. In this fascinating biography, Dick Steward traces the colorful Smith T's life from his early days in Virginia through his young adulthood. He then describes Smith T's remarkable career in the wilds of Missouri and his armed raids to gain land from Indians, Spaniards, and others.

Born into the fifth generation of Virginia gentry, young Smith first made his name on the Tennessee frontier. It was there that he added the "T" to his name to distinguish his land titles and other enterprises from those of the hosts of other John Smiths. By the late 1790s he owned or laid claim to more than a quarter million acres in Tennessee and northern Alabama.

In 1797, Smith T moved to Missouri, then a Spanish territory, and sought to gain control of its lead-mining district by displacing the most powerful American in the region, Moses Austin. He acquired such public positions as judge of the court of common pleas, commissioner of weights and levies, and lieutenant colonel of the militia, which enabled him to mount a spirited assault on Austin's virtual monopoly of the lead mines. Although neither side emerged a winner from that ten-year-old conflict, it was during this period that Smith T's fame as a gunfighter and duelist spread across the West. Known as the most dangerous man in Missouri, he was said to have killed fourteen men in duels.

Smith T was also recognized by many for his good works. He donated land for churches and schools and was generous to the poor and downtrodden. He epitomized the opening of the West, helping to build towns, roads, and canals and organizing trading expeditions.

Even though Smith T was one of the most notorious characters in Missouri history, by the late nineteenth century he had all but disappeared from the annals of western history. Frontier Swashbuckler seeks to rescue both the man and the legend from historical obscurity. At the same time, it provides valuable insights into the economic, political, and social dynamics of early Missouri frontier history.

Dick Steward is Professor of History at Lincoln University in Jefferson City, Missouri. He is the author of Duels and the Legacy of Violence in Missouri,Trade and Hemisphere: The Good Neighbor Policy and Reciprocal Trade, and Money, Marines, and Mission: Recent U.S.-Latin American Policy.