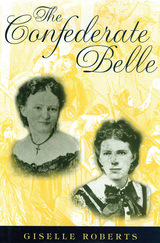 While historians have examined the struggles and challenges that confronted the Southern plantation mistress during the American Civil War, until now no one has considered the ways in which the conflict shaped the lives of elite young women, otherwise known as belles. In The Confederate Belle, Giselle Roberts uses diaries, letters, and memoirs to uncover the unique wartime experiences of young ladies in Mississippi and Louisiana. In the plantation culture of the antebellum South, belles enhanced their family’s status through their appearance and accomplishments and, later, by marrying well.
During the American Civil War, a new patriotic womanhood superseded the antebellum feminine ideal. It demanded that Confederate women sacrifice everything for their beloved cause, including their men, homes, fine dresses, and social occasions, to ensure the establishment of a new nation and the preservation of elite ideas about race, class, and gender. As menfolk answered the call to arms, southern matrons had to redefine their roles as mistresses and wives. Southern belles faced a different, yet equally daunting, task. After being prepared for a delightful “bellehood,” young ladies were forced to reassess their traditional rite of passage into womanhood, to compromise their understanding of femininity at a pivotal time in their lives. They found themselves caught between antebellum traditions of honor and of gentility, a binary patriotic feminine ideal and wartime reality.
Rather than simply sacrificing their socialization for patriotic womanhood, belles drew upon southern honor to strengthen their understanding of themselves as young Confederate women. They used honor to shape and legitimize their obligations to the wartime household. They used honor to fashion their role as patriotic women. They even used honor to frame their relationship to the cause. By drawing upon this powerful concept, young ladies ensured the basic preservation of an ideology of privilege. Their unique Confederate bellehoods would ultimately shape the ways in which they viewed themselves and the changed social landscape during the conflict—and after it.
AUTHOR BIOGRAPHY

Giselle Roberts is Research Associate in the Department of History at La Trobe University, Melbourne, Australia.