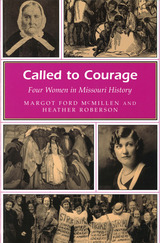 While there are many accessible biographies of important Missouri men, there are few such biographies of Missouri women, which might suggest that they did not count in history. This book, written by a mother-and-daughter team, helps to correct that misconception by tracing the lives of four women who played important roles in their eras. These women were exceptional because they had the courage to make the best of their abilities, forging trails and breaking the barriers that separated women’s spheres from those of men:
·        A Native American woman the French newspapers called “Ignon Ouaconisen,” and the people of Paris called the “Missouri princess,” lived from about 1700 to after 1751. She traveled with adventurer Etienne de Bourgmont and bore his child. Although much of her life remains a mystery, her story gives us insights into the lives of Missouri Indian women in the days of the fur trade.
·        Pioneer Olive Boone (1783–1858) came to the Louisiana Territory as the teenage bride of Nathan Boone, guiding a skiff and their horses across the Missouri River to join the Daniel Boone family near St. Charles. For much of her married life, she stayed alone with her fourteen children while her husband traveled on lengthy hunting expeditions, supervised the Boone saltworks in present-day Howard County, and spent years in the military.
·        Martha Jane Chisley, born a slave in 1833, was brought to northeast Missouri as a young woman. During the Civil War, Martha Jane escaped with her children to Illinois. She overcame many obstacles so that her son Augustine was able to enter school and get an education. Augustine studied in Rome and became the first nationally known African American priest.
·        Nell Donnelly of Kansas City was a pioneering businesswoman who founded a dress company that became the world’s largest, brightening the wardrobe of the “housewife” while also creating fair working conditions for her employees. Born into an ordinary middle-class family in 1889, she achieved a success and high profile that brought its own problems.
Using Missouri and Illinois archives, Margot Ford McMillen and Heather Roberson have compiled well-known and obscure materials to describe the lives of both women and men, showing how roles changed as Missouri and America matured. Bringing together family insights and the rare writings of observers who almost never mention women in their journals, Called to Courage will be welcomed by anyone interested in women’s history or Missouri history.
AUTHOR BIOGRAPHY
Margot Ford McMillen is an instructor at Westminster College in Fulton, Missouri. She is the author of several books, including Paris, Tightwad, and Peculiar: Missouri Place Names (University of Missouri Press).
Heather Roberson began her writing career with a daily column in the Columbia Daily Tribune. She is a student at the University of California–Berkeley.