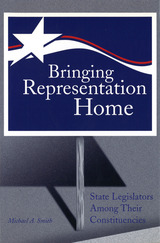 “What is representation?” is a question that has been raised and discussed many times. In Bringing Representation Home, Michael A. Smith strays from the norm by asking instead, “How can we discover what representation is?” In pursuing the answer to this question, Smith focuses on what representation is in practice, not what it is in theory. Over the course of two legislative sessions, Smith interviewed and observed twelve state representatives in an effort to better understand and define their approaches to representation. He offers generalizations, but only after grounding his study in descriptions of representatives performing their jobs.
The twelve representatives are divided into four categories: Burkeans, in-district advocates, advocates beyond the district, and ombudspersons. Burkeans emphasize character and experience, advocates stress “socializing the conflict,” and ombudspersons underscore listening, responding, and compromising. Smith superbly builds his argument for this classification through an assortment of illustrative examples. He also makes a strong case that home style—the symbolic presentation that a representative makes at home in seeking political support from constituents—is a product of the interaction between the legislator’s personality and progressive ambition and the district’s characteristics and politics. Smith contends that the key to an effective representational strategy is for a representative to have not only an ideology that reflects the politics of his or her community, but also an understanding of the district’s interests, informed by interactions with organized constituencies at home.
Smith helps personalize the legislators of this study, providing a balanced, realistic view. He also offers a new treatment of the representational roles concept, drawing on recent controversies in political science. In this context, he discusses works by Donald Searing, Richard Fenno, Burdett Loomis, and Malcolm Jewell, among others.
Because the nature of representation at the state level is such an important topic—one that will become even more important as state legislatures gain greater influence—Bringing Representation Home makes a vital contribution to political science literature. Written in an accessible and engaging style, this book will be of great interest to students and scholars of legislatures and state politics.
AUTHOR BIOGRAPHY
Michael A. Smith is Visiting Professor of Political Science at Kansas State University in Manhattan, Kansas.
TABLE OF CONTENTS