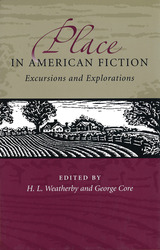 This collection of essays devoted to the centrality of place in the short stories and novels of some of the twentieth century’s most famous American writers was conceived as a way to honor the life and career of Walter Sullivan, an author for whom place was central both in his fiction and in his critical writing. The works explored in this volume range from the Middle West realism of Fitzgerald and Powers to the wilderness vision of Faulkner and the historical and political fiction of Warren.

In “Imagination in Place” Wendell Berry describes how place in the context of local geography, local culture, and agriculture influenced his writings. Thomas Bontly’s “Wallace Stegner’s Lyrical Realism”explains the importance not only of a person’s securing his or her place but of an author’s doing so as well.

Eudora Welty is the pivotal figure in this book, and her "Place in Fiction" is considered in this collection time and again by many of the contributors. Both Lewis Simpson and Denis Donoghue choose her story “No Place for You, My Love” to demonstrate place and its effect on the outside world. Donoghue stresses Welty’s imagery emphasizing the occasional and emblematic nature of the local image. In following the logic of his reflections he decides that Welty’s focus on place constitutes a theory of pastoral.

Lewis Simpson also stresses the importance of place as the essential element in the same story and discusses the mysterious relationship between the two unnamed principals, but Simpson goes on to show the importance of time in fiction, especially the novel; and he reveals the linkage that connects time to memory, specifically to what he deems “the culture of memory” in Faulkner and Welty.

Place, as Eudora Welty declares, is “where [the writer] has his roots, place is where he stands; in his experience out of which he writes, it provides the base of reference; in his work, the point of view.” “Fiction,” she continues, “depends for its life on place.” These essays, whose authors include Joseph Blotner, Scott Donaldson, Charles East, George Garrett, Louis D. Rubin, Jr., and Elizabeth Spencer, prove the truth of that dictum.
AUTHOR BIOGRAPHY
H. L. Weatherby is Professor Emeritus of English at Vanderbilt University in Nashville, Tennessee. He is the author of Keen Delight: The Christian Poet in the Modern World.

George Core has edited the Sewanee Review since 1973. He is the editor of several books, including The Critics Who Made Us: Essays from “Sewanee Review” (University of Missouri Press).
TABLE OF CONTENTS