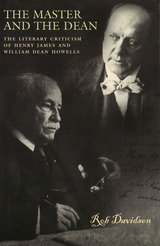 Henry James (1843–1916) and William Dean Howells (1837–1920) are best known for the central roles they played as nineteenth-century American novelists, penning such classics as James’s Portrait of a Lady and Howells’s The Rise of Silas Lapham. Their importance as literary critics, however, has been underplayed for decades. Although certain aspects of James’s and Howells’s criticism have been carefully considered—James’s “Prefaces” and Howells’s Criticism and Fiction, for example—no scholar has previously undertaken a comprehensive comparative study of their respective critical oeuvres. In The Master and the Dean, Rob Davidson presents the first book-length study of James’s literary criticism to be published since the early 1980s and the first-ever book-length study of Howells’s criticism. Considering Howells’s commonly accepted position among scholars as the most influential American literary critic of the period, such a study is long overdue.
Beginning with a detailed examination of the European and domestic sources that led James and Howells toward realism, Davidson examines the interrelationships between the two writers, with special emphasis on their diverging aesthetic concerns and attitudes toward the market and audience, their beliefs concerning the moral value of fiction and the United States as a literary subject, and their various writings about each other. A rigorous, intertextual reading of their work as critics reveals both deeper rifts and more intimate similarities between the two writers than have been recognized previously. Of special note is Davidson’s careful attention to the frequently overlooked final two decades of Howells’s career.
This close look at the lesser-known critical work of James and Howells will appeal both to scholars of the period and to anyone seeking an exceptional introduction to a crucially important era of American literary criticism.
AUTHOR BIOGRAPHY
Rob Davidson is Assistant Professor of English at California State University, Chico. He is the author of Field Observations: Stories (University of Missouri Press).
TABLE OF CONTENTS