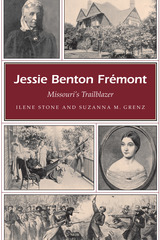 When Sen. Thomas Hart Benton, one of Missouri’s first two senators and the great-uncle of the famous regionalist painter of the same name, was expecting his second child in 1824, he hoped it would be a boy. Although he was graced instead with a second girl, he named her Jessie (in honor of his father, Jesse) and raised her more like a son than a nineteenth-century daughter, introducing her to the leading politicians of the day and making sure she received an education that emphasized history, literature, and languages. Jessie and her father were close; Senator Benton was the main influence in her life until 1841, when, at the age of seventeen, she married army explorer John Charles Frémont against her parents’ wishes.
Some degree of reconciliation occurred when Benton promoted Frémont’s famous explorations of the Great West. Jessie remained in Missouri with the couple’s young daughter, Lily, but she later helped to write and edit reports of her husband’s adventures, and these narratives spread the lure of the West to nineteenth-century America.
In 1849 Jessie and Lily made a harrowing and treacherous journey across the Isthmus of Panama to rendezvous with Frémont in San Francisco. With income from their gold mines, the Frémonts established a home in California. In 1856, with the country on the brink of civil war, Frémont’s antislavery position was instrumental in his being chosen as the Republican Party’s first presidential nominee. Jessie was a staunch campaigner for her husband’s unsuccessful presidential bid, which her father, a lifelong Democrat, refused to endorse.
When President Lincoln appointed Frémont as the commander of the Department of the West in 1861, Jessie served as his unofficial aide and closest adviser. In a particularly dramatic incident, she rushed to Washington, D.C., for a meeting with Lincoln in which she argued passionately for her husband’s proposal to emancipate the slaves in Missouri.
After the Civil War, the Frémonts’ financial situation took a downturn. Undaunted, Jessie supported the family by writing about her adventures in the American West in such works as A Year of American Travel and Souvenirs of My Time. Like many women of her era, Jessie lived her ambitions largely through her husband’s career, but she also made a name for herself as a writer and a firm opponent of slavery.
AUTHOR BIOGRAPHY
Ilene Stone is a former adjunct faculty member in American history at San Diego Community College, where she taught for more than thirty years. She is the author of Jane Froman: Missouri’s First Lady of Song (University of Missouri Press).
Suzanna M. Grenz is Associate Professor of American History at Palomar College in San Marcos, California.
TABLE OF CONTENTS
Contents
Preface
Acknowledgments
Chapter 1. The Bentons
Chapter 2. Jessie Meets John
Chapter 3. The Frémonts ~ The Early Years
Chapter 4. Jessie’s Travels
Chapter 5. California
Chapter 6. “Fair Jessie”
Chapter 7. Turmoil
Chapter 8. Jessie and Lincoln
Chapter 9. The Frémonts ~ The Later Years
Chapter 10. Jessie Alone
Afterword. Making History
For More Reading
Index
REQUEST ACCESSIBLE FILE