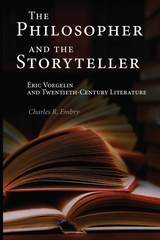 Throughout his philosophical career, Eric Voegelin had much to say about literature in both his published work and his private letters. Many of his most trenchant comments regarding the analysis of literature appear in his correspondence with critic Robert Heilman, and, through his familiarity with that exchange, Charles Embry has gained extraordinary insight into Voegelin’s literary views.

The Philosopher and the Storyteller is the first book-length study of the literary dimensions of Voegelin’s philosophy—and the first to use his philosophy to read specific novels. Bringing to bear a thorough familiarity with both Voegelin and great literature, Embry shows that novels—like myths, philosophy, and religious texts—participate in the human search for the truth of existence, and that reading literature within a Voegelinian framework exposes the existential and philosophical dimensions of those works.

Embry focuses on two key elements of Voegelin’s philosophy as important for reading literature: metaxy, the in-between of human consciousness, and metalepsis, human participation in the community of being. He shows how Voegelin’s philosophy in general is rooted in literary-symbolic interpretation and, therefore, provides a foundation for the interpretation of literature. And finally he explores Voegelin’s insistence that the soundness of literary criticism lies in the consciousness of the reader.

Embry then offers Voegelinian readings that vividly illustrate the principles of this approach. First he considers Graham Swift’s Waterland as an example of the human search for meaning in the modern world, then he explores the deformation and recovery of reality in Heimito von Doderer’s long and complex novel The Demons, and finally he examines how Flannery O’Connor’s The Violent Bear It Away mythically expresses the flux of divine presence in what Voegelin calls the Time of the Tale.

The Philosopher and the Storyteller unites fiction and philosophy in the common quest to understand our nature, our world, and our cosmos. A groundbreaking exploration of the connection between Voegelin and twentieth-century literature, this book opens a new window on the philosopher’s thought and will motivate readers to study other novels in light of this approach.

AUTHOR BIOGRAPHY
Charles R. Embry is Professor of Political Science at Texas A&M University–Commerce. He is the editor of Robert B. Heilman and Eric Voegelin: A Friendship in Letters, 1944–1984 and coeditor of Philosophy, Literature, and Politics: Essays Honoring Ellis Sandoz, both available from the University of Missouri Press.
TABLE OF CONTENTS