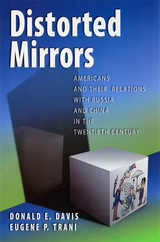 As the United States enters the twenty-first century, it confronts two powers that loomed less large on the world stage a century before. Yet American policies toward Russia and China have been shaped by attitudes going back even further, as this new book relates.
Distorted Mirrors traces American prejudices toward the two countries by focusing on the views of influential writers and politicians over the course of the twentieth century. Donald Davis and Eugene Trani show where American images of Russia and China originated, how they evolved, and how they have often helped sustain foreign policies generally negative toward the former and positive toward the latter.
This wide-ranging survey draws on memoirs, archives, and interviews, much the material appearing in print for the first time, to show how influential individuals shaped these perceptions and policies based on what they saw—or thought they saw—in those two countries. Through a series of tableaux that traces America’s relations with Russia and China through the twentieth century, the authors show how personalities of certain players impacted interpretation of key situations and conflicts and how cultural attitudes toward Russia and China became ingrained and difficult to dislodge.
The book traces formative attitudes back to two late-nineteenth-century books, with George Kennan’s Siberia and the Exile System painting a grim picture of tsarist penal colonies and William Rockhill’s Land of the Lamas depicting China as an exotic Shangri-la. Davis and Trani show how these images were sustained over the years: for Russia, by Slavic expert Samuel Harper, State Department official Robert Kelley, journalist Eugene Lyons, ambassador William Bullitt, President Franklin D. Roosevelt, and policymakers George F. Kennan and Paul Nitze; and for China, by President Woodrow Wilson, philosopher John Dewey, journalist Edgar Snow, novelist Pearl S. Buck, ambassador Nelson T. Johnson, FDR, journalist Theodore White, and statesman Henry Kissinger. They also relate how Ronald Reagan and George H. W. Bush tried to replace these misconceptions with a policy of accommodation, and they assess the state of current U.S. attitudes and policies.
Distorted Mirrors marks a fresh approach to U.S. relations with these countries, emphasizing long-term attitudes that influenced policies rather than the reverse. It shows us that perceptions shaped over the course of the twentieth century are crucial for their bearing on the twenty-first, particularly if those unrestrained prejudices reemerge.
AUTHOR BIOGRAPHY
Donald E. Davis is Professor Emeritus of History at Illinois State University.Eugene P. Trani is President of Virginia Commonwealth University.They are the authors of The First Cold War: The Legacy of Woodrow Wilson in U.S–Soviet Relations (University of Missouri Press).