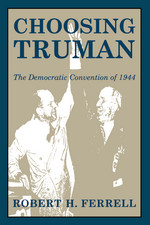 As Franklin D. Roosevelt's health deteriorated in the months leading up to the Democratic National Convention of 1944, Democratic leaders confronted a dire situation. Given the inevitability of the president's death during a fourth term, the choice of a running mate for FDR was of profound importance. The Democrats needed a man they could trust. They needed Harry S. Truman.

Robert Ferrell tells an engrossing tale of ruthless ambition, secret meetings, and party politics. Roosevelt emerges as a manipulative leader whose desire to retain power led to a blatant disregard for the loyalty of his subordinates and the aspirations of his vice presidential hopefuls. Startling in its conclusions, impeccable in its research, Choosing Truman is an engrossing, behind-the-scenes look at the making of the nation's thirty-third president.