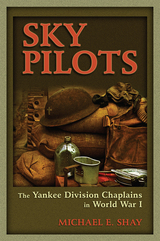 This exploration of the noncombatants who earned the love and respect of the doughboys should appeal to armchair historians and scholars alike. Enhanced with photographs and an appendix summarizing the biographical information for each man, Sky Pilots is the first comprehensive look at the role of the Army chaplaincy at the divisional level. In August 1917, the U.S. 26th “Yankee” Division was formally activated for service in World War I. When the soldiers arrived in France, they were accompanied by more than three dozen volunteer chaplains. These clergymen experienced all the horrors of war, shared all the privations of the common soldier, and earned the love and affection of their “boys.” Two died, several were gassed or wounded, and many were decorated by France and the United States for their heroism, yet their stories have been lost to history. Through extensive research in published and archival sources, as well as firsthand materials obtained from the families of several chaplains, Michael E. Shay brings to life the story of these valiant men—a story of courage in the face of the horrors of war and of extreme devotion to the men they served.

Just as important, Sky Pilots follows the chaplains home and on to their subsequent careers. For many, their war experiences shaped their ministries, particularly in the area of ecumenism and the Social Gospel. Others left the ministry altogether. To fill in the chaplains’ stories, Shay also examines the evolution of the U.S. Army Chaplain Corps, the education of the newly appointed chaplains, and the birth of the Yankee Division.
AUTHOR BIOGRAPHY
Michael E. Shay is a Senior Superior Court Judge in Connecticut. He has had a lifelong interest in American history, particularly the story of the 26th “Yankee” Division in World War I. His previous books include Revered Commander, Maligned General: The Life of Clarence Ransom Edwards, 1859–1931 and A Civilian in Lawton’s 1899 Philippine Campaign: The Letters of Robert D. Carter, both published by the University of Missouri Press.
TABLE OF CONTENTS
Contents
List of Illustrations
Preface
Acknowledgments
Abbreviations
1. “Sky Pilots”
2. Early Days
3. Toul Sector
4. Aisne-Marne
5. St. Mihiel and Troyon
6. Verdun
7. Going Home
8. “Recalled to Life”
Afterword
Appendix
Notes
References
Index
REQUEST ACCESSIBLE FILE