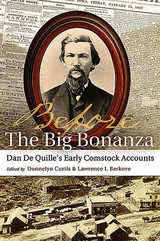 The discovery and mining of the Comstock Lode in Nevada forever changed the mining culture of the American West. Using the pen name Dan De Quille, in 1876 William Wright published The Big Bonanza, the best-known contemporary account of the Comstock Lode mines. Previously, however, in nearly fifty newspaper accounts from 1860 to 1863, De Quille had documented the development of the early Comstock with a frankness, abundance of detail, sense of immediacy, and excitement largely absent from his book. Donnelyn Curtis and Lawrence I. Berkove have gathered those accounts together in Before The Big Bonanza.
De Quille describes the amazing transformation of the Comstock in less than four years from miscellaneous tent camps and primitive mining sites to an incredible complex of underground shafts and tunnels beneath a group of wealth-producing cities, with modern buildings, state-of-the-art mills, orderly streets, and traffic jams. He captures the vitality of the inhabitants' resolution and resourcefulness as they survive destructive storms and being cut off from supplies and entertainment, and he chronicles the events that kept Nevada and California in the Union. While reporting the prevailing violence of brawling and dueling and anti-Indian prejudice, De Quille at the same time conveys his thoughtful observations on the significance to democracy and civilization of the existence of such license.
This trove of columns, collected from a variety of newspapers, is history in the making and additionally casts new light on the life and rapidly developing art of De Quille, the biographer of the Comstock and one of the most versatile and accomplished authors of the Old West.
AUTHOR BIOGRAPHY
Donnelyn Curtis is Head of Special Collections at the University of Nevada, Reno Libraries.
Lawrence I. Berkove is Emeritus Professor of English, at the University of Michigan-Dearborn. His numerous publications include The Sagebrush Anthology: Literature from the Silver Age of the Old West (University of Missouri Press).