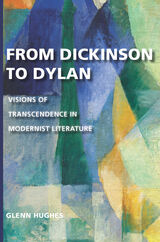 Glenn Hughes examines the ways in which six literary modernists—Emily Dickinson, Marcel Proust, T. S. Eliot, Ezra Pound, Samuel Beckett, and Bob Dylan—have explored the human relationship to a transcendent mystery of meaning. Hughes argues that visions of transcendence are, perhaps surprisingly, a significant feature in modernist literature, and that these authors’ works account for many of the options for interpreting what transcendent reality might be.

This work is unique in its extended focus, in a comparative study spanning a century, on the persistence and centrality in modernist literature of the struggle to understand and articulate the dependence of human meaning on the mystery of transcendent meaning. Hughes shows us that each of these authors is a mystic in his or her way, and that none are tempted by the modern inclination to suppose that meaning originates with human beings. Together, they address one of the most difficult and important challenges of modern literature: how to be a mystic in modernity.
AUTHOR BIOGRAPHY
Glenn Hughes is  Professor Emeritus of Philosophy at St. Mary’s University in San Antonio. He is the author of several books, including A  More Beautiful Question: The Spiritual in Poetry and Art, and Transcendence and History: The Search for Ultimacy from Ancient Societies to Postmodernity (both University of Missouri Press).
TABLE OF CONTENTS
Contents
Introduction
Chapter One. Emily Dickinson: Transcendence, Love, and Terror
Chapter Two. Marcel Proust: In Between World and Eternal Being
Chapter Three. Unsought Revelations of the Eternal: T. S. Eliot’s Four Quartets and Proust
Chapter Four. History and Transcendence in Ezra Pound’s Cantos and T. S. Eliot’s Four Quartets
Chapter Five. Mystic Without Faith: Samuel Beckett and the Ghost of Love in Krapp’s Last Tape
Chapter Six. Bob Dylan’s Evocations of Mystery
Conclusion
Acknowledgments
Notes
Bibliography
Index
Permissions
REQUEST ACCESSIBLE FILE