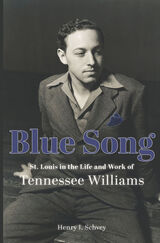 In 2011, the centennial of Tennessee Williams’s birth, events were held around the world honoring America’s greatest playwright. There were festivals, conferences, and exhibitions held in places closely associated with Williams’s life and career—New Orleans held major celebrations, as did New York, Key West, and Provincetown. But absolutely nothing was done to celebrate Williams’s life and extraordinary literary and theatrical career in the place that he lived in longest, and called home longer than any other—St. Louis, Missouri.

The question of this paradox lies at the heart of this book, an attempt not so much to correct the record about Williams’s well-chronicled dislike of the city, but rather to reveal how the city was absolutely indispensable to his formation and development both as a person and artist. Unlike the prevailing scholarly narrative that suggests that Williams discovered himself artistically and sexually in the deep South and New Orleans, Blue Song reveals that Williams remained emotionally tethered to St. Louis for a host of reasons for the rest of his life.
AUTHOR BIOGRAPHY
Henry I. Schvey is Professor of Drama and Comparative Literature at Washington University in St. Louis and the author of three books, including Oskar Kokoschka: The Painter as Playwright. He lives in St. Louis, Missouri.
TABLE OF CONTENTS
Contents
List of Illustrations
Preface
Acknowledgments
List of Abbreviations
Introduction
Chapter One. Without Contraries Is No Progression
Chapter Two. A Fatal Need
Chapter Three. Have You Ever Seen the Skeleton of a Bird?
Chapter Four. More Faithful Than I Intended to Be
Chapter Five. I Never Left
Chapter Six. In the Friggins Division
Chapter Seven. Back to Saint Pollution
Chapter Eight. This House Is Empty Now
Appendix. Tennessee Williams Trail, by Jessie Hoagland
Notes
Bibliography
Index
REQUEST ACCESSIBLE FILE