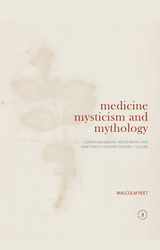 Subsequent chapters go on to explore Wilkinson’s early role in publishing the poetry of William Blake; his dealings with Thomas Carlyle and Ralph Waldo Emerson; his lifelong friendship with Henry James, Sr; his association with Daniel Dunglas Home, Thomas Lake Harris, and Andrew Jackson Davis; his homeopathic practice and its influence on James Tyler Kent; and his engagement with such causes as utopian socialism, environmentalism, women’s suffrage, antivivisectionism, and the deregulation of medicine. The book concludes with a broader study of Wilkinson’s interest in mythology, psychology, and Christian spiritualism.
AUTHOR BIOGRAPHY
Malcolm Peet is a retired consultant psychiatrist and was honorary professor in the School of Health and Related Research at the University of Sheffield until 2017. Internationally recognized for his research on the relationship between nutrition and mental well-being, Malcolm also holds a master’s degree in Western Esotericism. Since his retirement from clinical practice, Malcolm’s intellectual focus has been on spirituality, particularly that of Emanuel Swedenborg and his followers.