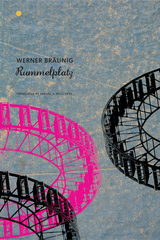 Werner Bräunig was once regarded as the great hope of East German literature—until an extract from Rummelplatz was read before the East German censorship authorities in 1965, and fierce opposition summarily sealed its fate. The novel’s sin? It painted an all too accurate picture of East German society.

Rummelplatz, translated here by Samuel P. Willcocks, focuses on a notorious East German uranium mine, run by the Soviets and supplying the brotherland’s nuclear program. Veterans, fortune seekers, and outsiders with tenuous family ties like narrator Peter Loose flock to the well-paying mine, but soon find their new lives bleak. Safety provisions are almost nonexistent and tools are not adequately supplied. The only outlets for workers are the bars and fairgrounds where copious amounts of alcohol are consumed and brawls quickly ensue. In Rummelplatz, Bräunig paints his characters as intrinsically human and treats the death of each worker, no matter how poor, as a great tragedy. Bräunig occupies a cultlike status in Germany, and this new translation of his masterpiece is an excellent introduction for English-language readers.

Praise for the German edition

“One of the best novels of postwar Germany. . . . The narrative force and the emotional punch are sensational.”—Die Zeit

“An event in literary history and one ‘helluva’ novel.”—Der Spiegel
AUTHOR BIOGRAPHY
Werner Bräunig (1934-1976) was a German writer. Samuel P. Willcocks is a translator living in Romania. He has translated The Abolition of Species, Dark Company, and Singers Die Twice for Seagull Books.
TABLE OF CONTENTS