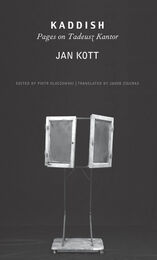 BUY
Kaddish: Pages on Tadeusz Kantor
by Jan Kott
edited by Piotr Kloczowski
translated by Jakob Ziguras
Seagull Books, 2020
Paper: 978-0-85742-748-9
Tadeusz Kantor (1915–90) was renowned for his revolutionary theater performances in both his native Poland and abroad. Despite nominally being a Catholic, Kantor had a unique relationship with Jewish culture and incorporated many elements of Jewish theater into his works. In Kaddish, Jan Kott, an equally important figure in twentieth-century theater criticism, presents one of the most poignant descriptions of what might be called “the experience of Kantor.” At the core of the book is a fundamental philosophical question: What can save the memory of Kantor’s “Theatre of Death”—the Image, or the Word/Logos? Kott’s biblical answer in Kaddish is that Kantor’s theatre can be saved in its essence only by the Word, the Logos. This slim volume, Kott’s final work, is a distilled meditation that casts light on how two of the most prominent figures in Western theater reflected on the philosophy of the stage.
AUTHOR BIOGRAPHY
Jan Kott (1914–2001) was a Polish theater critic and theorist. After defecting to the United States, he taught at Yale University, the University of California, Berkeley and Stony Brook University. He is best known for his book Shakespeare, Our Contemporary. Piotr Kloczowski is a Polish essayist and editor and professor at the National Theatre Academy in Warsaw. Jakob Ziguras is a Poland-born Australian poet and translator.