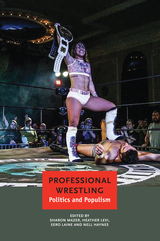 BUY
Professional Wrestling: Politics and Populism
edited by Sharon Mazer, Heather Levi, Eero Laine and Nell Haynes
Seagull Books, 2020
Paper: 978-0-85742-794-6
eISBN: 978-0-85742-812-7
A wildly popular form of mass media and live entertainment, professional wrestling makes a spectacle of violent acts. With its long history of working contemporary events into storylines and commenting upon cultural and military conflicts, professional wrestling is also intrinsically political. Its performance—theatricalities, machinations and conditions of production, figurations, and audiences—arises from and engages with the world around. Whether flowing with the mainstream of popular culture or fighting at the fringes, professional wrestling shows us how we are fighting, what we are fighting about, and what we are fighting for.

This edited volume asks how professional wrestling is implicated in the current resurgence of populist politics, whether right-wing and Trump–inflected, or leftist and socialist. How might it do more than reflect and, in so doing, reaffirm the status quo? While provoked by the disruptive performances of Trump as candidate and president, and mindful of his longstanding ties to the WWE, this timely volume looks more broadly and internationally at the infusion of professional wrestling’s worldview into the twinned discourses of politics and populism. The contributors are scholars from a wide range of disciplines: theater and performance studies; cultural, media, and communication studies; anthropology and sociology; and gender and sexuality studies. Together they argue that the game’s popularity and its populist tendencies open it to the left as well as to the right, to contestation as well as to conformity, making it an ideal site for working on feminist and activist projects and ideas.
AUTHOR BIOGRAPHY
Sharon Mazer is professor of theatre and performance studies in Te Ara Poutama, the Faculty of Maori and Indigenous Development at Auckland University of Technology. She is author of Professional Wrestling: Sport and Spectacle (1998, 2020) and I Have Loved Me a Man: The Life and Times of Mika (2018), and also editor of The Intricate Art of Actually Caring, and Other New Zealand Plays (2018). Heather Levi is an assistant professor of cultural anthropology at Temple University in Philadelphia, Pennsylvania. She is the author of The World of Lucha Libre: Secrets, Revelations and Mexican National Identity (2008). She has trained in lucha libre (Mexican professional wrestling) as well as several martial arts. Eero Laine is the director of graduate studies and assistant professor in the Department of Theatre and Dance at the University at Buffalo, State University of New York. The author of Professional Wrestling and the Commercial Stage (2020) and a co-editor of Performance and Professional Wrestling (2017), he is also the editor of the Journal of Dramatic Theory and Criticism and a co-editor of Lateral. Nell Haynes is an anthropologist focusing on popular culture in Latin America, paying attention to the ways gender and race are manifest in performance and media. She is currently a faculty fellow in anthropology and Latin American studies at Colby College. She is author of Social Media in Northern Chile: Posting the Extraordinarily Ordinary (2016) and co-author of How the World Changed Social Media (2016).