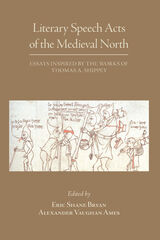 Literary Speech Acts of the Medieval North: Essays Inspired by the Works of Thomas A. Shippey
edited by Eric Shane Bryan and Alexander Vaughan Ames
Arizona Center for Medieval and Renaissance Studies, 2020
Paper: 978-0-86698-610-6
This volume brings together examinations of pragmatic meaning and proverbs of the Medieval North. Pragmatic meaning, which relies upon cultural and interpersonal context to go beyond the simple semantic and grammatical meaning of an utterance, has a fundamental connection with proverbs, which also communicate a deeper meaning than what is actually said. Essays in this volume explore this connection by examining the language of generosity, conversion, friendship, debate, dragon proverbs, and saints’ lives. These essays are inspired by the works of Thomas A. Shippey, who has been a pioneer in the study of wisdom poetry and pragmatics in medieval literature.
AUTHOR BIOGRAPHY
Eric Shane Bryan is Associate Professor of English at Missouri University of Science and Technology.

Alexander Vaughan Ames is a Lecturer in the Social Advocacy and Ethical Life Initiative of the College of Arts and Sciences at the University of South Carolina.
TABLE OF CONTENTS

Beowulf’s Bane, Fáfnir, and the Firedrake of Erebor: Proverbial Dragons and the Implicatures of Pragmatic Discourse
-Jonathan Evans

Examining The Proverbs of Hendyng for the Essentials: Its Meaning, Authorship, and Readership
-Graham P. Johnson

The Wisdom of Friendship in Hávamál
-Michael Nagy

The Fall of the Angels as Apotropaic Weapon in Cynewulf’s Saints’ Lives
-Jill M. Fitzgerald