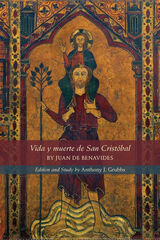 As the patron of travelers, Saint Christopher inspired one of the most popular cults in the medieval era, which spread across Europe and especially the Iberian Peninsula. Artistic renderings of the saint were found near the doors of most Spanish Gothic churches, and paratheatrical representations of Saint Christopher were also commonplace in religious processions. His conversion and martyrdom were often staged between the fifteenth and early eighteenth centuries.

In the theater, Juan de Benavides’s Vida y muerte de San Cristóbal is one of two known comedias dealing with the saint, but it was heavily censored after its premiere. The immense popularity of St. Christopher and other primitive saints first drew the attention of the Council of Trent in the mid-1500s, when the Catholic Church attempted to suppress the influence of the earlier saints due to their fantastical nature. The stories of these saints were censored, rewritten or even omitted in the post-Tridentine martyrologies. This publication is the first critical edition of the only extant copy of Benavides’s playscript. The circumstances surrounding Benavides’s play continue a dialogue about such important topics as censorship and the influence of the church over artistic production.

AUTHOR BIOGRAPHY
Anthony J. Grubbs is associate professor of Spanish and chairperson of the Department of Romance and Classical Studies at Michigan State University. He is the author of The Playwright's Perspective: Innovative Dramaturgy and Its Poetics in Early Modern Spain.
TABLE OF CONTENTS