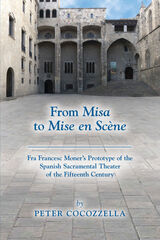 From Misa to Mise en Scène: Fra Francesc Moner’s Prototype of the Spanish Sacramental Theater of the Fifteenth Century
by Peter Cocozzella
Arizona Center for Medieval and Renaissance Studies, 2020
Paper: 978-0-86698-640-3
As both layman and Franciscan friar, the Catalan writer known as Francesc Moner (ca 1463–1495) is one of the leading exponents of the bilingual (Catalan-Castilian) culture that flourished in Barcelona in the late 1400s. In his approach to Sepultura d’amor (Burial of Love), Moner’s longest poem, Peter Cocozzella focuses on the author’s ingenious version of a kind of parody that desacralizes but does not desecrate the celebration of the funeral Mass. Cocozzella discovers the aspects of Moner’s unconventional idea of a theater based on the dramatics of the monologue and on the transformation of the divine ritual into a human analogue of transubstantiation. This allegorical pattern validates the profile of the masterpiece in question as one of the earliest manifestations of the auto sacramental, the distinctive theatrical genre scripted in the language of Castile. The book includes the text of Sepultura and its translation.
AUTHOR BIOGRAPHY
Peter Cocozzella is professor emeritus in the Department of Romance Languages and Literatures at Binghamton University.
TABLE OF CONTENTS