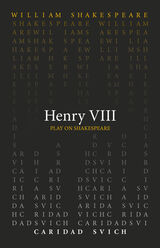 Caridad Svich offers a new take on the history play, which tells the story of Henry VIII’s marriage to Anne Boleyn.

Shakespeare’s Henry VIII is a story of a brazen race to power and the desire for an heir. Advised by Cardinal Wolsey, Henry VIII is caught between church and state as he meets Anne Boleyn and seeks to annul his marriage to Queen Katherine. This episodic and plot-driven play examines the machinations of royal power. Shakespeare’s Henry VIII, in this new translation by Caridad Svich, is a swift-moving, complex tale of intrigue.

This translation of Henry VIII was written as part of the Oregon Shakespeare Festival’s Play On! project, which commissioned new translations of thirty-nine Shakespeare plays. These translations present work from “The Bard” in language accessible to modern audiences while never losing the beauty of Shakespeare’s verse. Enlisting the talents of a diverse group of contemporary playwrights, screenwriters, and dramaturges from diverse backgrounds, this project reenvisions Shakespeare for the twenty-first century. These volumes make these works available for the first time in print—a new First Folio for a new era.
AUTHOR BIOGRAPHY
Caridad Svich is a playwright and translator. She is editor at Contemporary Theatre Review and has authored and edited several books on theater.
TABLE OF CONTENTS