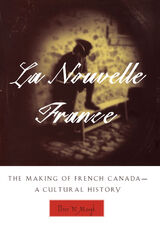 On one level, Peter Moogk's latest book, La Nouvelle France: The Making of French Canada—A Cultural History, is a candid exploration of the troubled historical relationship that exists between the inhabitants of French- and English- speaking Canada. At the same time, it is a long- overdue study of the colonial social institutions, values, and experiences that shaped modern French Canada. Moogk draws on a rich body of evidence—literature; statistical studies; government, legal, and private documents in France, Britain, and North America— and traces the roots of the Anglo-French cultural struggle to the seventeenth century. In so doing, he discovered a New France vastly different from the one portrayed in popular mythology. French relations with Native Peoples, for instance, were strained. The colony of New France was really no single entity, but rather a chain of loosely aligned outposts stretching from Newfoundland in the east to the Illinois Country in the west.
Moogk also found that many early immigrants to New France were reluctant exiles from their homeland and that a high percentage returned to Europe. Those who stayed, the Acadians and Canadians, were politically conservative and retained Old Régime values: feudal social hierarchies remained strong; one's individualism tended to be familial, not personal; Roman Catholicism molded attitudes and was as important as language in defining Acadian and Canadian identities. It was, Moogk concludes, the pre-French Revolution Bourbon monarchy and its institutions that shaped modern French Canada, in particular the Province of Quebec, and set its people apart from the rest of the nation.