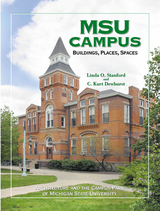 Since its founding in 1855, Michigan State University has emerged from its modest “oak opening” in the wilderness to become a large campus park. This story reflects the commitment of campus leaders since the nineteenth century to develop MSU as a beautiful and educational public resource, as well as a demonstration model, befitting the premier land-grant institution in the United States.
From early landscape gardeners influenced by Ossian Simonds and the nationally known Olmsted Brothers, to the vision of President John Hannah, the consistent intent has been to interrelate architecture and the campus park. The result is a campus whose development reflects major trends in American architecture and whose contributors include local, regional, and nationally known architectural firms. In MSU Campus—Buildings, Places, Spaces, two Michigan State University professors provide a history and way of seeing the campus by offering eight areas to explore.
Each area includes selected historical sites or markers, public art, and natural locations that complement more than one hundred extant buildings, complete with individual stylistic and historical descriptions and photographs. Historical facts about Michigan State University, suggestions for further reading, and an ample glossary of architectural terms make this book a resource for anyone who is interested in Michigan State University, art and architectural history, Michigan history, and visual culture.
The book will continue to serve as a documentary reminder of MSU’s heritage and vital institutional future long after the 2005 sesquicentennial.