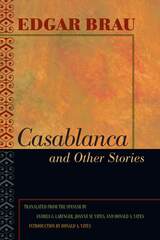 Edgar Brau, one of the most exciting South American writers to emerge in the past twenty years, debuts his first English-language collection with the publication of Casablanca and Other Stories. The fiction of Edgar Brau draws not only upon the rich literary heritage of his native Argentina but also upon the body of work that has now rightly been formed into a South American canon, embracing those such as Jorge Luis Borges, Gabriel García Marquez, and Isabelle Allende. He brings a unique perspective to his narratives—narratives forged in the political and social upheaval that has been modern South America. Employing a fantasy-like aspect that goes beyond magical realism, his work is reminiscent of Edgar Allan Poe in his use of atmosphere as an additional character. These short stories signal a new era, much as the publication of Jorge Luis Borges’ Labyrinths in 1962 heralded a coming-of-age for his generation.
Translated by Donald A. Yates, Andrea Labinger, and Joanne M. Yates, this collection includes stories from two of Edgar Brau’s collections—El poema y otras historias and Tres cuentos—to bring to a fresh audience the very best new work of a major Argentinean author.