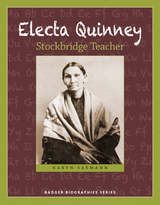 Electa Quinney loved to learn. Growing up in the early 1800s in New York, she went to some of the best boarding schools. There she learned how to read, write, and solve tough math problems—she even learned how to do needlework. Electa decided early on that she wanted to become a teacher so she could pass her knowledge on to others.

But life wasn’t simple. Electa was a Stockbridge Indian, and her tribe was being pressured by the government and white settlers to move out of the state. So in 1828, Electa and others in her tribe moved to Wisconsin. Almost as soon as she arrived, Electa got to work again, teaching in a log building that also served as the local church. In that small school in the woods, Electa became Wisconsin’s very first public school teacher, educating the children of Stockbridge-Munsee Band of the Mohican Indians as well as the sons and daughters of nearby white settlers and missionaries.

Electa’s life provides a detailed window onto pioneer Wisconsin and discusses the challenges and issues faced by American Indians in the nineteenth century. Through it all, Electa’s love of learning stands out, and her legacy as Wisconsin’s first public school teacher makes her an inspiration to students of today.

AUTHOR BIOGRAPHY
Karyn Saemann is a former newspaper reporter and editor who now works as a freelance writer, editor, and reviewer. She and her husband, whose family are enrolled members of the Oneida Nation of Wisconsin, live in Deerfield, Wisconsin, with their two children
TABLE OF CONTENTS
Contents
1. Meet Electa Quinney
2. New York Childhood
3. The Stockbridge Indians
4. To Wisconsin
5. Among the Oneida
6. Indian Territory
7. Among the Cherokee
8. Return to Wisconsin
9. Still a Teacher
10. A Tribal Fight
11. An Old Trunk
Appendix: Electa’s Timeline
Glossary
Reading Group Guide and Activities
To Learn More about the Mohican Indians
Acknowledgments
Index