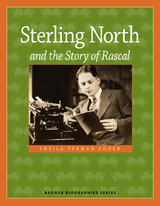 This Badger Bio shares the story of author Sterling North – his adventures and misadventures as a young boy growing up in Edgerton, Wisconsin. Young readers will learn how North’s early experience in Wisconsin influenced him in writing some of his best loved children’s books – such as Rascal and So Dear To My Heart.

The story gives readers a glimpse of early 20th century customs and lifestyles in the rural Midwest. It also includes global issues of the time, including World War I and the Spanish flu pandemic, which greatly affected Sterling’s boyhood. As examples, his admired older brother Hershel served overseas in WWI as Sterling was growing up, bringing world events to the North family’s doorstep. His mother Gladys died when Sterling was only 7 years old because of the lack of medical advances in the early 1900s. And, as a young man, Sterling was hit by polio, a common epidemic scourge that left many children with paralysis.

Readers will learn of Sterling North’s successes, not only as a beloved author of children’s books, but as a columnist for the Chicago Daily News, an editor of North Star children’s history books, and a well-respected critic of other children’s literature.