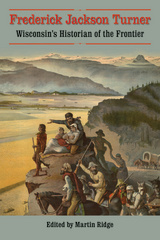 This book contains four essays by and about Frederick Jackson Turner (1861-1932), the Wisconsin-born historian whose ideas and writings have had such a profound impact upon the way Americans view their past, and their place in the world. It is a book not only for the scholar and teacher (who will find it both useful and incisive), but also for the mythic "general reader" who wants to broaden and enrich his aquaintanceship with Turner and the celebrated Frontier Thesis. In addition to essays by Turner and by Martin Ridge of The Huntington Library and the late Ray Allen Billington, the book is illustrated with photos from the State Historical Society of Wisconsin.
AUTHOR BIOGRAPHY
Martin Ridge is Senior Research Associate at the Henry E. Huntington Library, San Marino, California — a position first held by Frederick Jackson Turner.
TABLE OF CONTENTS
Preface
Contents
Introduction / Martin Ridge
Young Fred Turner / Ray Allen Billington
The Significance of the Frontier in American History / Frederick Jackson Turner
The Significance of History / Frederick Jackson Turner
Bibliographic Note / James P. Danky
Notes to the Text