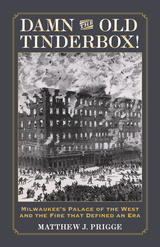 In the dead of an unassuming January night in 1883, Milwaukee’s Newhall House hotel was set on fire. Two hours later, the building—once among the tallest in the nation—lay in ruins and over seventy people were dead. It was a tragedy that brought global notice to Milwaukee, with daring escapes and rescues and heart-wrenching tales of victims burned to death or killed as they leapt from the burning building. From the great horror emerged an even greater string of mysteries: Who had set the fire and who was to blame for the staggering loss of life? The Newhall’s hard-luck barkeeper? A gentleman arsonist? What of the many other unexplained fires at the hotel? Had the Newhall’s management neglected fire safety to boost their profits?

Damn the Old Tinderbox! is the gripping tale of one of the Gilded Age’s forgotten calamities, a fire that remains among the deadliest unsolved arsons in American history, and a significant chapter in both the history of Milwaukee and the Midwest.

AUTHOR BIOGRAPHY
Matthew J. Prigge is a freelance author and historian from Milwaukee and the host of the radio program What Made Milwaukee Famous. His work has been featured in both local and national publications and has won multiple awards, including the 2013 William Best Hesseltine Award from the Wisconsin Historical Society Press and the 2017 Gambrinus Prize from the Milwaukee County Historical Society. He is the author of Milwaukee Mayhem, also published by the WHS Press, and Outlaws, Rebels, & Vixens: Motion Picture Censorship in Milwaukee, 1914–1971.
TABLE OF CONTENTS
Contents
Prologue: I Read It in the Book
PART ONE: THE HOUSE
1. A Crown for the Queen of the West
2. Stubborn Faith
PART TWO: THE FIRE
3. Burn a Man Up without Giving Him a Chance
4. Hell Itself
5. End Times
PART THREE: THE RUINS
6. Recovery
7. The Will of Mine Enemies
8. The People vs. Scheller
9. How to Survive a Fire
Appendix: The Newhall Dead
Notes
Acknowledgments