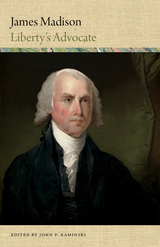 A Word Portrait of an American Founder.

America has had few political thinkers who have rivalled James Madison. The son of a wealthy planter, Madison was an unhealthy child and was beset by physical infirmities throughout his long life, and grew into a cerebral man. Madison left Virginia to attend the College of New Jersey, but returned to his native state after completing his studies. Though he aspired to be a college professor, Madison instead went into public service and became one of the most influential, guiding voices of the Founding Era. Madison’s Virginia Plan would be used as a blueprint for the Constitutional Convention, where the Articles of Confederation would be replaced with a new Constitution that bore traces of Madison’s influence throughout.

Editor John Kaminski has gathered a remarkable collection of quotations by and about James Madison for the third installment of his Word Portraits of America’s Founders series. Through these words by and about Madison, we learn more about one of the country’s most influential Founding Fathers, who held a lifelong commitment to liberty and opposed oppression.
AUTHOR BIOGRAPHY
John P. Kaminski is the founder and director of The Center for the Study of the American Constitution in the History Department at the University of Wisconsin–Madison. He is director and co-editor of The Documentary History of the Ratification of the Constitution, of which twenty-eight volumes have been published by the Wisconsin Historical Society Press. A leading scholar on Constitutional history, Kaminski has published widely on a variety of topics in the American Founding Era.
TABLE OF CONTENTS
Contents
Preface
Introduction
Descriptions of James Madison
Madison's Descriptions of Others
Emblematic Quotations
Biographical Notes
Index
About the Author