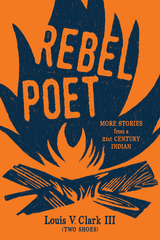 This eagerly anticipated follow-up to the breakout memoir How to Be an Indian in the 21st Century delves more deeply into the themes of family, community, grief, and the struggle to make a place in the world when your very identity is considered suspect. In Rebel Poet: More Stories from a 21st Century Indian, author Louis Clark examines the effects of his mother's alcoholism and his young sister's death, offers an intimate recounting of the backlash he faced as an Indian on the job, and celebrates the hard-fought sense of home he and his wife have created. Rebel Poet continues the author's tradition of seamlessly mixing poetry and prose, and is at turns darker and more nuanced than its predecessor.
AUTHOR BIOGRAPHY
Born and raised on the Oneida Reservation in northeastern Wisconsin, Louis V. Clark III turned to poetry to continue the oral tradition of his people, the People of the Standing Stone. He is a member of the Iroquois Confederacy and of the Bear clan. His first chapbook, titled Two Shoes, was published in the spring of 2011 by the Sequoyah National Research Center at the University of Arkansas. His memoir How to Be an Indian in the 21st Century, published by the Wisconsin Historical Society Press, received the Midwest Booksellers Choice Award for 2017. He received a Fellowship Award for his work from the Oneida Nation Arts Program and the Wisconsin Arts Board. He and his wife live in Omro.
TABLE OF CONTENTS
Contents
Kanuhwelatuksla
I
II
III
IV
V
Epilogue
Acknowledgments
About the Author