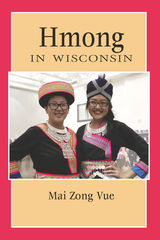 Unknown to many Americans at the time, the Hmong helped the US government fight Communists in Laos during the Secret War of the 1960s and 1970s, a parallel conflict to the Vietnam War. When Saigon fell and allies withdrew, the surviving Hmong fled for their lives, spending years in Thai refugee camps before being relocated to the United States and other countries.

Many of these families found homes in Wisconsin, which now has the third largest Hmong population in the country, following California and Minnesota. As one of the most recent cultural groups to arrive in the Badger State, the Hmong have worked hard to establish a new life here, building support systems to preserve traditions and to help one another as they enrolled in schools, started businesses, and strived for independence.

Told with a mixture of scholarly research, interviews, and personal experience of the author, this latest addition to the popular People of Wisconsin series shares the Hmong’s varied stories of survival and hope as they have become an important part of Wisconsin communities.