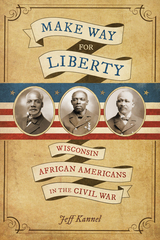 Hundreds of African American soldiers and regimental employees represented Wisconsin in the Civil War, and many of them lived in the state either before or after the conflict. And yet, if these individuals are mentioned at all in histories of the state, it is with a sentence or two about their small numbers, or the belief that they all were from slaveholding states and served as substitutes for Wisconsin draftees.  Relative to the total number of Badgers who served in the Civil War, African Americans soldiers were few, but they constituted a significant number in at least five regiments of the United States Colored Infantry and several other companies. Their lives before and after the war in rural communities, small towns, and cities form an enlightening story of acceptance and respect for their service but rejection and discrimination based on their race. Make Way for Liberty will bring clarity to the questions of how many African Americans represented Wisconsin during the conflict, who among them lived in the state before and after the war, and their impact on their communities
AUTHOR BIOGRAPHY
Jeff Kannel has been a volunteer and tour guide at the Civil War Museum in Kenosha, Wisconsin, since 2012 and speaks around the state about the role of Wisconsin African American soldiers and employees during the Civil War.
TABLE OF CONTENTS
Contents
Preface
Introduction
1. Arrival
2. Recruitment
3. On the Battlefield
4. Postwar Life
5. After Reconstruction
Epilogue: Legacy
Enlisted Men
Employees
Acknowledgments
Notes
Index