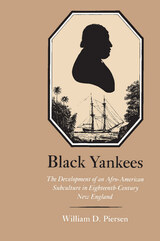 This book examines the development of an Afro-American subculture in eighteenth-century New England. Piersen concerns himself not with the machinery of slave control or the political and social disabilities of bondage, but with the processes of cultural change and creation from the black bondsman's point of view. What was it like to be an African immigrant in colonial New England? What attitudes and assumptions underlay the Afro-American response to Yankee culture? What does the development within the confines of a predominantly white and ethnocentric New England of an Afro-American folk culture in religion, public rituals, folk arts and crafts, social mores, and daily behavior say about the creation of American culture?

On the face of it, the master class called the tunes and slaves danced the beat. Blacks who were taken into New England's bondage were clearly engulfed in a pervasive, narrow-minded Euro-American society that had no interest in fostering Afro-American autonomy. The New England experience was often cruel, and the numbers alone suggest it was among the most unequal of black/white cultural contacts in the New World. Nonetheless, despite the strictures of bondage, the black Yankees of eighteenth-century New England created a sustaining folk culture of their own.
AUTHOR BIOGRAPHY
William D. Piersen is professor of history at Fisk University. His Black Legacy: America's Hidden Heritage, also published by the University of Massachusetts Press, was a Choice Outstanding Academic Book.